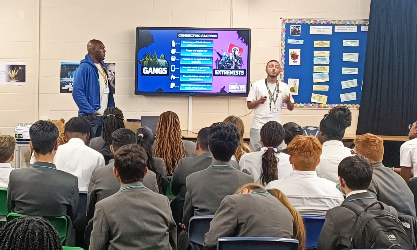 On Wednesday 22nd June, St. Giles Trust visited The Warren School to deliver their BRAVE (Building Resilience Against Violence and Extremism) workshop to the Year 9 cohort.

The first half of the workshop explored different types of extremism, how social media can be manipulated to glamourise extremist views and how young people are targeted and recruited into extremist groups. The second half of the session focussed on the realities of gang involvement, including personal testimonies from volunteers. Pupils were exposed to some of the harsh truths about gang membership, including issues around drugs, violence, family and the criminal justice system. Pupils were also educated around common strategies gangs use in order to groom and recruit vulnerable young pupils.

The feedback from the pupils was exemplary and it was beneficial to have welcome such a relatable workshop into the school to run alongside our existing PSCHE offering.